By Xu Ruiqing and Dong Xue

SHANGHAI, Aug. 10 (Xinhua) -- Shanghai has experienced extreme high temperatures for several consecutive days. According to the Shanghai Central Meteorological Observatory, as of Wednesday, the city has recorded a total of 37 days with temperatures above 35 degrees Celsius so far this year.

The city has had five days with temperatures reaching or topping 40 degrees Celsius so far in 2022, matching the record set in 1873. 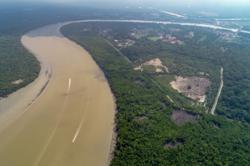