Firefighters and members of a search and rescue team pull up a net as they rescue a Beluga whale which strayed into the France's Seine river, near the Notre-Dame-de-la-Garenne lock in Saint-Pierre-la-Garenne, France, August 10, 2022. REUTERS/Benoit Tessier

SAINT-PIERRE-LA-GARENNE, France (Reuters) - A beluga whale, whose life was at risk after it strayed into the River Seine, was lifted out of the river on Wednesday as authorities continued to work on its rescue.

The extraction of the whale was witnessed by a Reuters photographer at the scene, and by the marine conservation group Sea Shepherd France.

The beluga swam nearly halfway to Paris before local authorities confined the all-white whale in a large lock system. They will aim to move the whale to another navigation lock closer to the sea and with salt water. 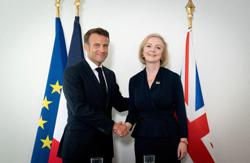