SYDNEY (Reuters) - James Marape was sworn in as the prime minister of Papua New Guinea on Tuesday after lawmakers in the new parliament returned him unopposed to the post.

Voting in PNG's general election began on July 4 and ended on July 22, but counting was extended until Monday because of special circumstances including security issues, attacks on ballot boxes and logistical challenges, the electoral commission said.

The election in the Pacific nation is among the world's most challenging due in part to difficult terrain, extreme weather, poor transport infrastructure, and linguistic and cultural diversity.

By Tuesday, the deadline for parliament to sit, 105 out of 118 seats had been declared. Two women were among those elected.

Marape, leader of the Pangu Party that clinched 36 seats, won 97 votes on the floor of parliament to become prime minister, and will form a coalition government with over a dozen minor parties and independents.

Marape, who first became prime minister in 2019, said the coalition had a collective mandate and called for the nation to unite.

Media have reported roughly 50 election-related deaths this year, down from 204 deaths documented in the 2017 vote. 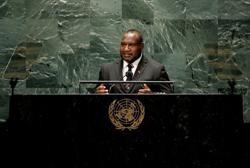