JUBA, Aug. 1 (Xinhua) -- The United Nations Children's Fund, or UNICEF, said Monday that 68 percent of children in South Sudan are exclusively breastfed during the first six months of their life.

This figure is a positive improvement from 2010 when rates were only 45 percent. The figure, however, also meant that one in three children are still not being exclusively breastfed for the first six months of life, UNICEF said.

"UNICEF works with its partners at the community level to create awareness among all mothers in South Sudan about identifying and preventing malnutrition among their children. Exclusive breastfeeding is one of the key pillars of our integrated program to prevent malnutrition among children," UNICEF Representative for South Sudan Hamida Lasseko, said in a statement issued in Juba, the capital of South Sudan, to celebrate World Breastfeeding Week starting Aug. 1.

According to UNICEF, exclusive breastfeeding of children until six months is one of the simplest, safest, and healthiest means of feeding a baby and can help prevent malnutrition among children.

UNICEF together with the ministry of health is working with a coalition of nutrition partners to educate and support all mothers to adopt and increase the practice of exclusive breastfeeding of infants up to six months of age.

Victoria Anib, South Sudan's Undersecretary of the Ministry of Health, said the ministry will work with all partners to increase knowledge among all mothers in South Sudan to ensure that all babies are exclusively breastfed for the first six months of their lives.

"It is proven that breast milk is the only food that babies need for the first six months of their life, and it keeps them healthy and protected," Anib said. 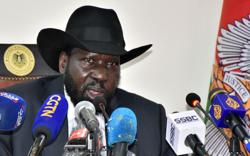