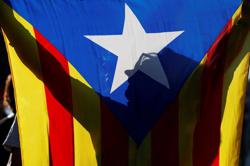 MADRID (Reuters) - Morocco and the European Union have agreed to cooperate more closely in combatting human trafficking after at least 23 migrants died during an attempted mass border crossing from Morocco into the neighbouring Spanish enclave of Melilla, Spain and Morocco said in a joint statement on Friday.

"Morocco is a strategic partner, a committed partner of the EU when it comes to managing migration in an orderly way. And we stands ready to deepening our cooperation, (...) working together in effective and efficient readmissions and returns and investing in legal pathways together," Johansson said in an accompanying video shared by Spain.

Some 2,000 migrants stormed the border with Melilla at the end of June, triggering two hours of violent skirmishes with Moroccan security forces and Spanish border guards.

Around 100 eventually managed to cross Europe's only land border with Africa but dozens of badly injured and dead migrants were later pictured lying stacked together by a Moroccan border fence.

Moroccan authorities said the migrants died in a stampede and others fell as they climbed.

Local human rights organisations claimed people had lain injured for hours without medical treatment, leading to a higher death toll. The United Nations and other human rights NGOs called for an independent probe into the clashes, while Morocco and Spain's prosecutor opened their own inquiries.

Shortly after the incident, Spanish Prime Minister Pedro Sanchez accused smuggling mafias of having organised the assault and thanked the Moroccan security forces for their help policing the border.

The representatives of Spain and the EU on Friday repeated their thanks to Morocco but also described what happened as "painful" and expressed regret for the deaths.

"It is important that we address these dangerous situations and these well-organized smuggling groups together to save lives and to manage migration in an orderly way," Johansson said.

Spain says its policy of working with African countries to contain migration at the point of origin has succeeded in stopping 40 percent of irregular migratory movements.