ATHENS, July 5 (Xinhua) -- A custom sit-ski wheelchair has been donated to a Greek Paralympic athlete by Piraeus Container Terminal S.A. (PCT), a subsidiary of China's COSCO Shipping Ports Limited, according to a press release e-mailed on Tuesday..

George Sfaltos, a skier and swimmer who recently ranked 4th in the 100 meter breaststroke event during the World Para Swimming Championships in Portugal, received the sit-ski last Friday at PCT's premises.

Sfaltos aims to compete in the 2026 Winter Paralympics in Italy, but has been training using an old, borrowed sit-ski wheelchair.

He emphasized that the new equipment will boost his chances of winning the ticket to Italy.

The sit-ski wheelchair was delivered by Han Wei, PCT PR & Communications Manager, who stressed that the company is committed to helping improve vulnerable people's lives.

In the past six months PCT has donated four custom wheelchairs, including to two children. 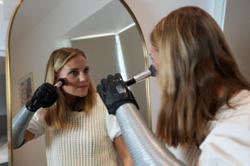