By Dominique Vidalon and Michel Rose

President Emmanuel Macron's centrist alliance lost its absolute majority in legislative elections in June despite his having won a second term in April.

Without pacts with other parties, Borne now faces the prospect of bill-by-bill negotiations in parliament.

"Disorder and instability are not options," Borne said in a keynote policy speech to lawmakers at times drowned by boos from the opposition.

She opted against a risky confidence vote after her policy speech.

Steps to improve the cost of living will include boosting pensions, capping rent increases and prolonging limits on gas and electricity prices, which are set to be included in a bill later this week, she said.

Other key priorities will include putting more police on the streets, deepening EU integration and tackling climate change.

The planned nationalisation of debt-laden utility EDF will allow the government to carry out "ambitious and essential projects" for France's energy future, Borne added.

Olivier Marleix of the conservative Les Republicains, whose votes, if added to Macron's alliance, would be enough to get bills adopted, insisted his party would stay in opposition but could back some bills, though at a political price.

"We have no intention to paralyse everything," he told parliament after Borne's speech. She can count on them, he said, if she takes their policies on board, for instance if she agrees to build more prisons or sharply curb immigration.

The left and far-right were more critical, mocking Borne for not calling a confidence vote. Hard-left lawmaker Mathilde Panot said it was "an admission of weakness".

The far-right's Marine Le Pen told Borne she had been right not to seek a confidence vote "because we have no trust in your government."

Government officials said they believed they could have narrowly won a confidence vote but that would have meant counting on the far right abstaining, which would have been politically unpalatable.

Left-wing parties tabled a no-confidence motion, which will be voted on in the coming days.

This is much less risky for Borne as it requires an absolute majority to precipitate a government's fall. Barring any major surprise, this will not happen after the conservatives and the far-right said they would not back it. 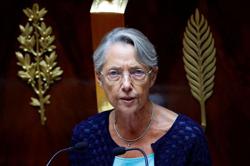