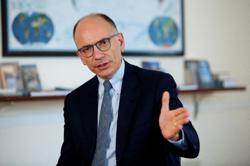 The rate has been above 1.0 for the second consecutive week, which means the virus is in a phase of expansion, the Ministry of Health and its High Institute of Health said in its weekly monitoring report.

The rate for the period between June 7 and June 20, the most recent period covered, was 1.30, meaning that for each Italian resident who recovered, 1.30 were newly infected. That figure is up from a transmission rate of 1.07 in the report a week ago.

Eight of Italy's 21 regions and autonomous provinces were considered at high coronavirus risk levels, with the others classified as moderate risk.