Researchers of the National Institute of Anthropology and History (INAH) work at the site of the burial of four infants dating from 1521 to 1620, but which were still buried in the pre-Hispanic style in downtown Mexico City, Mexico, in this handout distributed to Reuters on June 27, 2022. Juan Carlos Campos Varela/INAH - National Institute of Anthropology and History/Handout via REUTERS

MEXICO CITY (Reuters) - In the heart of Mexico City's bustling historic center, Mexican archaeologists have discovered the burial site of four Aztec children laid to rest some five centuries ago.

Archaeologists from Mexico's National Institute of Anthropology and History discovered the skeletons inside what they believe was a traditional four-room Aztec home dating between 1521 and 1620, the country's early colonial period.

Excavations also uncovered pre-Hispanic objects largely intact centuries later, including clay vases, ceramic pots, and a stone figure of a woman holding a child, the institute said in a statement this week.

The Aztecs were a warlike and deeply religious civilization, which built monumental works and practiced human sacrifice. However, researchers said the children found had died from natural causes and were buried in a traditional pre-Hispanic style.

Archaeologists continue to unearth remnants of the Aztec culture under Mexico City. In December, the remains of an elaborate Aztec altar were found near what is today Garibaldi Plaza, a site famous for mariachi music and revelry.

The Aztecs ruled an empire stretching from the Gulf of Mexico to the Pacific Ocean, encompassing much of modern-day central Mexico. Tenochtitlan was conquered by Spanish conquistador Hernan Cortes in 1521. 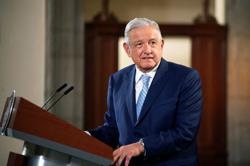