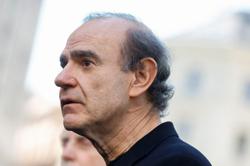 Based in separate rooms in a hotel in Qatar's capital, Iran's Ali Bagheri Kani and U.S. Iran special envoy Rob Malley are trying to break a months-long impasse that has stalled efforts to revive Tehran's 2015 nuclear pact with world powers.

Iran refuses to hold direct talks with its arch-foe, the United States, resulting in the "proximity" talks arrangement involving Mora.

The nuclear pact seemed near revival in March but talks were thrown into disarray, chiefly over Tehran's insistence that Washington remove the Islamic Revolutionary Guards Corps (IRGC), its elite security force, from the U.S. Foreign Terrorist Organization (FTO) list.

Last week, one Iranian and one European official told Reuters that Iran had dropped its demand for the removal of the IRGC's FTO sanctions, but still two issues, including one on sanctions, remained to be resolved.

In 2018 then-U.S. President Donald Trump reneged on the deal, under which Iran restrained its nuclear program in return for relief from economic sanctions, prompting Iran to begin violating its core nuclear limits about a year later.