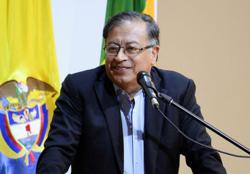 BOGOTA (Reuters) - Colombian leaders must recognize how drug trafficking has penetrated the country's culture, economy and politics and how the global war on drugs is driving its internal armed conflict, Colombia's truth commission said on Tuesday in a long-awaited report.

The commission, established as part of a 2016 peace deal between the government and the now-demobilized Revolutionary Armed Forces of Colombia (FARC) rebels, urged the country to reassess the role of drugs in its almost 60-year internal conflict.

Among the commission's recommendations are calls to implement substantial changes in drug policy with a focus on regulation, as well as to lead a global conversation addressing policy changes.

Other recommendations included advancing peace talks with the National Liberation Army (ELN), tackling corruption and guaranteeing quality of life and dignity for all communities.

President-elect Gustavo Petro attended the presentation and pledged to carry out the recommendations.

"These recommendations will become successful in the history of Colombia," said Petro, a former member of the M-19 rebels, adding cycles of vengeance must end.

Despite the peace deal, which ended FARC's role in the conflict, fighting continues in some parts of Colombia between leftist rebels from the ELN and FARC fighters who reject the accord, as well as crime gangs and the military.

The commission was given three years to investigate the truth of what happened during the armed conflict and offer a broad explanation of how atrocities happened.

The more than 1,000-page report included hours of testimony at private and public hearings, where perpetrators and victims alike spoke in often emotional recountings.

Drug trafficking and the war on drugs contributed to the degradation and extension of the conflict into one of total war, the report said.

Colombia, a major cocaine exporter, joined the war on drugs in the 1980s under pressure from the United States and continues to face constant U.S. pressure to eradicate coca, cocaine's chief ingredient, and tackle trafficking, the report said.

Current President Ivan Duque, whose term officially ends in August, did not attend. 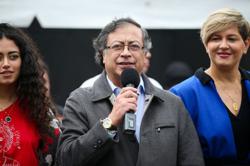