Eugenia Savchenko is helped by volunteers from the organisation Vostok SOS during the evacuation of civilians from war-affected areas of eastern Ukraine, amid Russia's invasion of the country, in Bakhmut, Donetsk region, Ukraine, June 27, 2022. REUTERS/Marko Djurica

BAKHMUT (Reuters) - Since Sievierodonetsk fell to Russian troops Ukrainian volunteer Eduard Skoryk has been getting more calls to evacuate frail and elderly people from Bakhmut, 70 km away, who fear their city in eastern Ukraine may be next.

Among them is Tamara Kanonchenko, 81. She is laid on her sofa by two male volunteers, wrapped in an improvised cloth stretcher and carried down the stairs from her flat to a van waiting outside, where she joins others who will be evacuated by train.

Social worker Iryna Navrotska watches and reassures the elderly lady she has brought meals to and looked after.

"Almost half of the people living in the city have left. She [Tamara Kanonchenko] has disabilities... she can't do much herself. So if there were a difficult situation, I would not be able to come and see her. Neither relatives nor acquaintances would be able to get to her place," said Navrotska.

Skoryk, 30, works with Vostok SOS, an NGO that originally began in 2014 helping those who were displaced by fighting between Russia-backed separatists and the Ukrainian army in the eastern regions of Donetsk and Luhansk. Since February 2022, Vostok SOS has evacuated more than 20,000 people from regions of eastern and southern Ukraine worst hit by the war.

"I think that from now on there will be more people fleeing the area," said Skoryk, whose group also delivers humanitarian aid. "The situation is very unstable and tense, you can hear and see it yourself. Shelling of Bakhmut became much more frequent."

Russia denies intentionally targeting civilians in its "special military operation" in Ukraine which has destroyed cities, killed thousands of people and driven millions from their homes.

Skoryk started volunteering with Vostok SOS in May but previously worked independently bringing people out of Sievierodonetsk. His family were evacuated in mid April but he decided to stay behind.

He drives the elderly from Bakhmut to the busy train station in Pokrovsk, another 70 km further west, where they will board a train heading west to Dnipro and Lviv.

At Pokrovsk, Skoryk and his team see Kanonchenko into a train compartment and hand her her walking stick.

"Initially, it was very painful to watch, because I myself was in such a situation. But over time, I somehow got used to it, and I know that we are doing a good thing," he said.

"It seems as if we are separating families, but at the same time I understand that we are sending people to safe places."

Ukraine lost the now-ruined city of Sievierodonetsk last week on the battlefields of the Donbas region. Russian forces are now trying to storm Lysychansk, across the Siverskyi Donets River from Sievierodonetsk, which would complete their capture of Luhansk province. 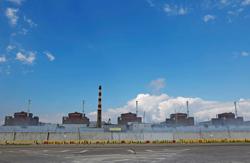