MADRID (Reuters) - About 30 anti-war activists protested on Monday in front of Pablo Picasso's historic Guernica painting about the horrors of war at the Reina Sofia Museum in Madrid, hours before the start on Tuesday of a NATO summit in the Spanish capital.

The protesters blame the military alliance for stoking the war in Ukraine and argue that "security is not achieved with more weapons", protest organizers Extinction Rebellion and Fridays For Future said in a joint statement.

In pictures and a video posted on social media, a dozen activists could be seen lying on the floor, corpse-like, in front of Picasso's masterpiece, inspired by the bloody air raid on the town of Guernica during the Spanish Civil War.

The protest in one of Europe's most famous museums lasted about 10 minutes before museum staff removed the protesters, organizers said. The museum declined to comment when contacted by Reuters.

Leaders of NATO member countries are due to visit the museum and see the painting during the Tuesday-Thursday summit as the organisation faces the challenge of the Russian invasion of Ukraine.

On Sunday, several thousand people protested in the streets of Madrid against the summit.

Picasso painted the renowned art piece after Nazi Germany sent aircraft to Spain in support of late dictator Francisco Franco to strike the Basque town on April 26, 1937. The attack killed as many as 1,600 people and wounded thousands. 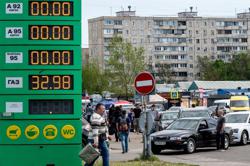