PRAGUE, June 27 (Xinhua) -- The first round of the presidential election in the Czech Republic will be held on Jan. 13-14, 2023, the President of the country's Senate, Milos Vystrcil, announced here on Monday.

The head of the upper house of the Czech Parliament is bound by law to set the presidential election date so that a possible runoff vote can take place at least 30 days before the incumbent president's term expires.

"Some candidates are now obviously looking for signatures, and some other politicians are carrying out activities that at least bear the hallmarks of an election campaign," Vystrcil said in a statement.

Former Prime Minister Andrej Babis and former chief-of-staff and former NATO (North Atlantic Treaty Organization) Military Committee head Petr Pavel are the biggest favorites, but neither of them has yet officially announced their bid, the Czech News Agency reported.

The parties in the coalition government have not presented their presidential candidates either, it added.

In the Czech Republic, the candidate with the absolute majority of valid votes is elected president. If no candidate receives a majority of the votes cast, a second round will take place in 14 days. 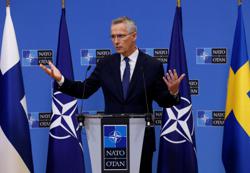