By Angelo Amante and Matthias Williams

FILE PHOTO: A general view of G7 leaders meeting with outreach guests for the working session of the G7 leaders' summit at the Bavarian resort of Schloss Elmau, near Garmisch-Partenkirchen, Germany, June 27, 2022. REUTERS/Lukas Barth/Pool

GARMISCH-PARTENKIRCHEN, Germany (Reuters) - Leaders of the Group of Seven wealthy democracies on Monday pledged to stand with Ukraine "for as long as it takes" by cranking up sanctions on Russia and backing security commitments for Kyiv in a post-war settlement.

Russia's invasion of Ukraine and the global economic fallout such as soaring energy and food prices has dominated this year's summit of the leaders of Germany, the United States, France, Italy, Canada, Japan and Britain.

"We will continue to provide financial, humanitarian, military and diplomatic support and stand with Ukraine for as long as it takes," said the statement.

The statement was issued on the second day of the summit taking place at a castle in the Bavarian Alps, shortly after Ukrainian President Volodymyr Zelenskiy addressed G7 leaders on the war via video link.

In that address, which was not broadcast to the public, Zelenskiy asked for anti-aircraft defence systems, more sanctions on Russia and security guarantees, a European official said. He also said he wanted Russia's war in Ukraine ended by the end of the year before the winter sets in.

The G7 leaders said they would continue to coordinate efforts to meet Ukraine's urgent military needs and were ready to work with interested countries and institutions on sustained security commitments.

It was up to Ukraine to decide on a future peace settlement, free from external pressure or influence, they said, but they stood ready to support an international reconstruction plan, drawn up and implemented by Ukraine in coordination with partners.

"We welcome the Presidency’s initiative to convene with Ukraine an international high-level experts conference, to make progress on a comprehensive reconstruction plan," the statement read.

The G7 leaders were ready to grant, or had already pledged or provided up to $29.5 billion in 2022 to help Ukraine close its financing gap, the statement said. Between 2014 and 2021, the group had already provided more than $60 billion of support.

The leaders were committed to cranking up the economic pressure on Russian "President (Vladimir) Putin’s regime and its enablers in Belarus, depriving Russia of the economic means to persist in its war of aggression against Ukraine".

They would also impose targeted sanctions on those responsible for war crimes, exercising "illegitimate authority" in Ukraine or helping Russian efforts that they said increased global food insecurity.

Russia denies committing war crimes in what it calls a special military operation, aimed at demilitarizing Ukraine and removing dangerous nationalists. Ukraine and its allies in the West say this is a baseless excuse for a war of aggression. 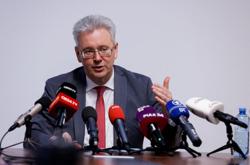