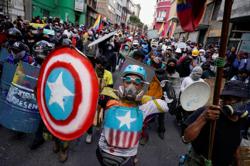 A barricade stands between demonstrators and security forces as protests continue amid a stalemate between the government of President Guillermo Lasso and largely indigenous demonstrators who demand an end to emergency measures, in Quito, Ecuador June 26, 2022. REUTERS/Adriano Machado

QUITO (Reuters) -Ecuadorean indigenous organizations said on Monday they would meet with the government to discuss demands for lower fuel and food prices which have sparked two weeks of protests, hitting the country's weakened economy and threatening its oil production.

President Guillermo Lasso late on Sunday announced a 10-cent per gallon cut to gasoline and diesel prices, the latest concession to try to quell the sometimes-violent demonstrations, which began on June 13.

At least seven people have died in connection with the marches and the country's oil output has been halved, with the energy ministry saying a production halt is possible by Tuesday if road blocks and takeovers of oil wells continue.

Lasso, whose adversarial relationship with the national assembly has worsened during the protests, has also withdrawn security measures and announced subsidized fertilizers and debt forgiveness.

Indigenous groups led by organization CONAIE said in a statement earlier on Monday that the price reduction to $2.45 per gallon for gasoline extra and $1.80 per gallon for diesel was not enough.

But in the afternoon the groups said they would attend a meeting with government officials set for 2 p.m. local time (1900 GMT), even as backers marched in Quito in rejection of the new prices.

"We will drive results for the 10-point agenda, we call on our mobilized supporters to be vigilant," CONAIE said on Twitter.

Having to cut oil production amid globally high prices "is a crime," Italo Cedeno, the manager of state-run oil company Petroecuador, told a local television station.

Lasso said earlier in a tweet that measures including the gas price cut will cost some $600 million.

Residents of Quito have complained of shortages of domestic gas and food. Other cities have also reported shortages of fuel and medical supplies for hospitals.

The public oil sector, private producers of flowers and dairy products, tourism and other businesses have lost about $500 million, the government has said.

Lawmakers are set to continue debate on Tuesday on an effort to remove Lasso from office, though it appears opposition groups lack the necessary support for the measure to succeed. 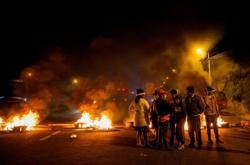 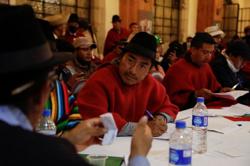