COPENHAGEN, June 24 (Xinhua) -- Denmark will temporarily reduce tax on electricity starting from the fourth quarter of this year as a means of "compensation to citizens for its rising energy prices".

The tax cut will reduce the electricity tax by 4 ore (0.57 U.S. cents) per kilowatt hour (kwh) in the October-Deccember period to 72.3 ore (10 U.S. cents), according to a cross-party agreement released Friday on the website of the Danish Ministry of Finance.

Many Danes have felt the pinch of climbing energy prices following the Russia-Ukraine conflict. As a result, the government has reached a broad agreement offering short-term compensations to those who suffer the most from inflation, the Ministry of Finance said in a press release.

The temporary reduction in electricity tax is part of a larger agreement suDanish kronerpported by the Danish Parliament's broad majority, which will distribute a total of 3.1 billion Danish kroner (0.44 billion U.S. dollars) to the citizens.

The agreement also includes a new green fund of 53 billion Danish kroner to accelerate green transition and phase out fossil fuels between 2024 and 2040.

Meanwhile, the parties agree that the green fund should be prioritized wisely and contribute to Denmark's green transition, including the achievement of Denmark's climate goals, through offshore wind development, afforestation, pyrolysis and carbon capture. 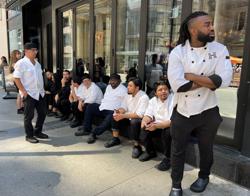