PARIS (Reuters) - Care worker Sandrine Marchal began voting for the far-right several years ago, frustrated by the constant struggle to make ends meet. On Sunday, her home town of Meaux, a conservative stronghold east of Paris, made the same political shift.

Famous for its brie cheese, it was one of dozens of constituencies to fall to the Rassemblement National party of Marine Le Pen for the first time in a parliamentary election, as disaffected voters expressed their frustration toward President Emmanuel Macron.

Le Pen's party on Sunday won 89 seats, 10 times more than in 2017 and its highest ever in the National Assembly. It is the first time it will be able to form a parliamentary group, meaning it will get more public financing, more speaking time, among other legislative powers.

Marchal said her discontent stemmed from a sense of abandonment by the state and said she believed immigrants were better looked after.

"I work two jobs and I receive no help from the state. They don’t work and they have all the help," said the 50 year old who used to vote for the conservatives.

"I am not racist, but at some point you become it."

Rassemblement National (RN) stalwarts called the result a "tsunami" in French politics. It vindicates Le Pen's efforts over the past five years to de-demonise her party's image, as well as reflecting the deep divides running through France

"We were pleasantly surprised by the mobilisation of our countrymen and by their wish that immigration, insecurity and the fight against Islamism should not disappear from the National Assembly," Le Pen said on Monday.

In Meaux, the far-right candidate Beatrice Roullaud won 52% of the votes, beating the candidate for a left-wing alliance. More than half of all registered voters stayed away from polling stations.

"What worries me today is that the values of the Republic will not be represented in this constituency," conservative mayor Jean-Francois Copé told Reuters, though he did not call for a vote against the far-right candidate in between the two rounds.

Celine Desbois, 51, said she voted for Le Pen's party after voting left nearly all her life because she felt increasingly vulnerable in her own town and wanted to send Macron a message.

"I am a social worker and voting RN goes against what I do, but it was necessary to get the government to take action," she said. Her daughter, 21, also voted RN.

Walking along the same high street, Daisy Hawa Jumapili, a 60-year-old secretary, expressed sadness at what she described as creeping racism in France.

"We have to be tolerant of one another," she said. 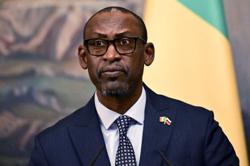