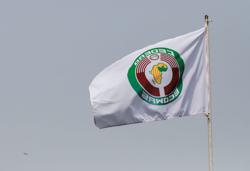 TRIPOLI, May 25 (Xinhua) -- The International Organization for Migration (IOM) said Wednesday it has arranged the voluntary return of 141 illegal migrants from Libya to their home country Mali.

"IOM's Voluntary Humanitarian Return (program) continues to offer an immediate safe alternative to migrants in Libya who wish to return home. IOM just facilitated a charter flight from Sabha, Libya to Bamako, Mali with 141 migrants," IOM said in a statement.

The migrants were living in different urban settings in Libya, the statement said.

The program, run by IOM, arranges the return of illegal immigrants stranded in Libya to their homeland.

Libya has been suffering insecurity and chaos since the fall of the late leader Muammar Gaddafi in 2011, making the North African country a preferred point of departure for illegal migrants who want to cross the Mediterranean Sea to European shores.

In 2021, a total of 32,425 illegal migrants were rescued and returned to Libya, while 662 died and 891 others went missing off the Libyan coast on the Central Mediterranean route, IOM said.