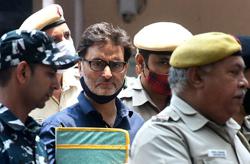 A man sits in front of closed shops during the second day of protesting against the sentencing of Kashmiri separatist leader Yasin Malik, Chairman of Jammu Kashmir Liberation Front (JKLF), near his residence in Srinagar May 26, 2022. REUTERS/Danish Ismail

SRINAGAR (Reuters) - Indian security forces have killed six militants in Kashmir in the past 24 hours while militants shot dead a female TV performer and a police officer, officials said on Thursday, following the conviction of the region's best-known separatist.

A New Delhi court on Wednesday ordered life in jail for Kashmiri separatist leader Yasin Malik for funding "terrorist" activities and for many other crimes. The sentencing prompted warnings from politicians that it would promote alienation and separatism in India's only Muslim-majority region. 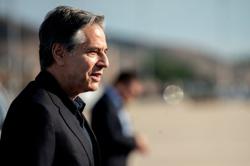