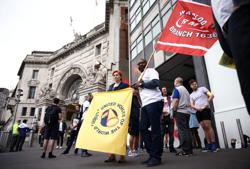 LONDON, May 24 (Xinhua) -- Growth of Britain's manufacturing and services sectors slowed to a 15-month low in May as the cost-of-living crisis hit customer demand, a report said on Tuesday.

The seasonally adjusted S&P Global / CIPS Flash UK PMI Composite Output Index fell sharply to 51.8 in May from 58.2 in April, signaling the slowest rise in business activity since the current phase of recovery began in March 2021, according to the report.

The report was published by S&P Global, a New York-headquartered market intelligence company, and the Chartered Institute of Procurement and Supply (CIPS), a UK-based global procurement and supply organization.

The data "signal a severe slowing in the rate of economic growth in May, with forward-looking indicators hinting that worse is to come," said Chris Williamson, chief business economist at S&P Global Market Intelligence.

"Meanwhile, the inflation picture has worsened as the rate of increase of companies' costs hit yet another all-time high," he added. "The survey data therefore point to the economy almost grinding to a halt as inflationary pressure rises to unprecedented levels."

The British Consumer Price Index rose by 9.0 percent in the 12 months to April 2022, up from 7.0 percent in March. The Bank of England (BoE) expects inflation to rise further over the remainder of the year to just over 9 percent in the second quarter (Q2) and averaging slightly over 10 percent at its peak in Q4.

"There are some signs that the rate of inflation could soon peak, with companies reporting price resistance from customers, and it is likely that the slowing in demand will help pull prices down in coming months," Williamson said.

"However, the latest data indicate a heightened risk of the economy falling into recession as the Bank of England fights to control inflation," he added.

The BoE once again raised its benchmark interest rate to 1 percent early this month, the highest level since 2009, to curb surging inflation.

"We have raised the official rate four times so far and have made clear that in order to bring inflation down to target we are prepared to do so again based on the assessment at each of our meetings," BoE Governor Andrew Bailey said on Monday.