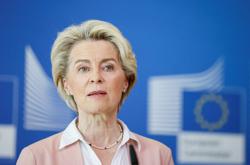 FILE PHOTO: An aerial view shows a tractor spreading fertiliser on a wheat field near the village of Yakovlivka after it was hit by an aerial bombardment outside Kharkiv, as Russia's attack on Ukraine continues, April 5, 2022. REUTERS/Thomas Peter/File Photo

DAVOS, Switzerland (Reuters) - Russia is using food supplies as a weapon with global repercussions, acting the same way as it does in the energy sector, European Commission President Ursula von der Leyen said on Tuesday.

Speaking at the annual World Economic Forum held in Davos, she said "global cooperation" was the "antidote to Russia's blackmail."

"In Russian-occupied Ukraine, the Kremlin's army is confiscating grain stocks and machinery (...) And Russian warships in the Black Sea are blockading Ukrainian ships full of wheat and sunflower seeds," von der Leyen added.

Russia's invasion of Ukraine - and the West's attempt to isolate Moscow as punishment - have sent the price of grain, cooking oil, fertiliser and energy soaring.

The Kremlin said on Monday that is was the West that was responsible for the global food crisis by imposing the severest sanctions in modern history on Russia over the war in Ukraine. 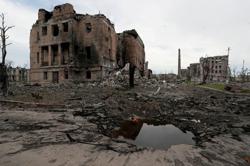