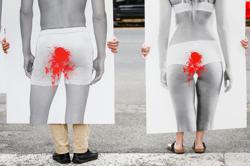 AMSTERDAM (Reuters) -A stowaway was discovered in the wheel section under the front of a freight plane that arrived at Amsterdam's Schiphol airport from South Africa on Sunday, Dutch military police said.

"The man is doing well considering the circumstances and has been taken to a hospital," the police, who are in charge of Dutch border control, said in a statement.

Marechausse spokeswoman Joanna Helmonds said the man's age and nationality had not yet been determined.

"Our first concern of course was for his health," she said.

"This is definitely very unusual that someone was able to survive the cold at such a height - very, very unusual."

She said police would not yet disclose the name of the freight airline involved.

Ukrainian negotiator says any agreement with Russia 'isn't worth a broken penny'
Some 10,000 Russian troops in Ukraine's Luhansk region - governor
Booking hotels online: Why you can never trust reviews 100%
Dyson shows off robotic arm that can find crisps at back of your sofa
Ukraine says Russian advances could force retreat in part of east
'Message to the world' - Lithuanians club together to buy drone for Ukraine
Research: Google Chrome only blocking a quarter of phishing websites
Google Street View’s ‘time travel’ feature comes to smartphones
Meta eyes profits with new WhatsApp platform for businesses
Roundup: U.S. Fed's closely watched inflation measure up 6.3 pct in April