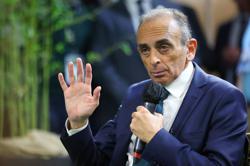 The court case concerned remarks he made on right-wing channel CNews in 2020 about migrants who arrive as unaccompanied children: "They've got no reason for being here, they are thieves, they are killers, they are rapists, that's all they do, they should be sent back," he said.

For several weeks last year, opinion polls indicated that Zemmour, who also has previous convictions for inciting racial hatred, had a chance of placing second in the presidential poll and facing Macron in a run-off. His campaign has since lost some steam and he now polls fourth.

Zemmour said he would appeal the ruling. He stood by his 2020 comments, adding that the court was condemning him for expressing his views. A senior CNews representative was also handed a fine over Zemmour's comments, lawyers said.