DUBAI (Reuters) - Iranian air defences fired a missile as part of an exercise on Saturday over the central town of Natanz, which houses nuclear installations, state TV reported, after local residents reported hearing a large blast.

Iranian news agencies earlier reported a large explosion in the sky above Natanz, but said there was no official explanation of the incident.

The semi-official Fars news agency quoted its reporter in nearby Badroud as saying a short blast was heard which was accompanied by an intense light in the sky. 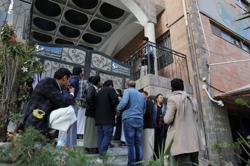