Austrian Chancellor Schallenberg says he will step down VIENNA (Reuters) - Austrian Chancellor Alexander Schallenberg said on Thursday he will step down once his conservative People's Party agrees on its next leader after Sebastian Kurz announced he was quitting the position earlier the same day.

"I firmly believe that both positions - head of government and leader of the Austrian party with the most votes - should soon once again be held by the same person," Schallenberg said in a statement. "I am therefore making my post as chancellor available as soon as the relevant course has been set within the party." 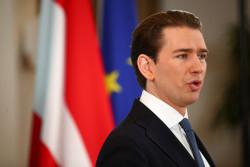