Pictures of Xiomara Castro, presidential candidate for the opposition Libre Party, are seen on a car prior to the November 28 general election, in Catacamas, Honduras November 27, 2021. REUTERS/Jose Cabezas

With votes from just over 16% of ballot boxes counted, Castro, the wife of former President Manuel Zelaya, had 53.4% support, while Nasry Asfura, candidate of the ruling National Party had 34%, the national electoral council said.

Victory for Castro would end a dozen years of conservative rule, and return the Honduran left to power for the first time since Zelaya was deposed in a 2009 coup.

Castro supporters hailed early results as proof of triumph. Still, both the National Party and her Liberty and Refoundation (Libre) party had claimed victory after a day of voting that had seen an historic turnout, the electoral council said.

Castro has sought to unify opposition to outgoing President Juan Orlando Hernandez, who has denied accusations of having ties to powerful gangs, despite an open investigation in the United States linking him to alleged drug trafficking.

After allying with the 2017 runner-up, a popular TV host, most polls had reinforced her front-runner status.

"We can't stay home. This is our moment. This is the moment to kick out the dictatorship," said Castro, mobbed by reporters just after voting in the town of Catacamas.

The candidate said she trusted that voters would report any problems they see and that international observers https://www.reuters.com/world/americas/honduras-parties-flag-fears-fraud-ahead-pivotal-vote-2021-11-27 would also help to ensure a fair vote. 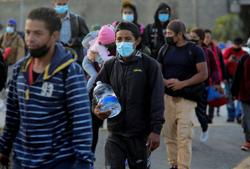 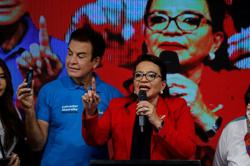