(Reuters) - A Guatemalan stowaway hidden in the landing gear compartment of an American Airlines jet survived a flight on Saturday from his home country to Miami, where he was turned over to U.S. immigration officials and taken to a hospital for evaluation.

The U.S. Customs and Border Protection agency confirmed the incident in a statement initially cited by Miami-based television station WTVJ, which posted video taken of the man at Miami International Airport shortly after the plane landed.

The video, attributed to the social media page "Only in Dade" on Instagram, showed the stowaway appearing dazed but otherwise unharmed, sitting on the tarmac beside the plane - dressed in blue jeans, a T-shirt, jacket and boots - as ground crew personnel tended to him and asked if he wanted some water.

"The individual was evaluated by emergency medical services and taken to a hospital for medical assessment," the agency added. "This incident remains under investigation."

American Airlines issued a statement saying its Flight 1182 from Guatemala City to Miami arrived shortly after 10 a.m. local time and "was met by law enforcement due to a security issue."

The airline gave no further details, except to say it was assisting in the investigation. The Guatemala-to-Miami trip is a flight of just over 2 1/2 hours.

Guatemala has accounted for a large portion of some 1.7 million migrants apprehended or expelled by U.S. border agents over the past year, many of them Central Americans fleeing violent gangs and grinding poverty.

Immigration attorney Angel Leal told WTVJ the Guatemalan stowaway would be detained by CBP while facing an expedited removal order.

The incident was reminiscent of footage in August showing desperate Afghans trying to latch onto the exterior of a U.S. military cargo jet as it taxied for take-off during chaotic evacuations from Kabul after Taliban forces seized control of Afghanistan. Separate video showed what appeared to be two people falling from the plane as it flew off from Kabul.

The Federal Aviation Administration declined to comment on Saturday's incident.

According to the FAA, 129 people have attempted to stow away in the wheel wells or other areas of commercial aircraft worldwide since 1947. Of those, the agency said, 100 have died of injuries or exposure.

In one such incident in April 2014, a 16-year-old boy who ran away from home survived five hours in the wheel well of a jetliner as it flew from California to Hawaii. 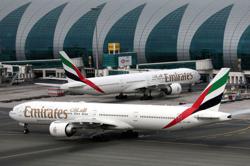