Logging to help the climate? Gabon turns to its rainforests 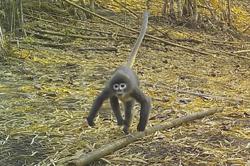 MAYUMBA, Gabon (Reuters) - With its oil reserves in decline, Gabon is betting that careful logging can safeguard the vast wealth of its forests, halving carbon emissions associated with the industry while producing more timber.

How Central African countries like Gabon manage their share of the world's second-largest rainforest is critical. The so-called lungs of Africa store more carbon per hectare than the Amazon, help regulate temperatures, and generate rain for millions in the arid Sahel and distant Ethiopian highlands.

"It's heart-wrenching because we're destroying part of the environment," he said. "We have to cut this tree, get it out, and sell it so we can make a living."

The next day, his team spotted animal prints in the mud near the giant stump. A leopard and a gorilla had been past.

Gabon faces a conundrum. Its relatively untouched share of the Congo Basin rainforest makes it one of the world's most forested countries, a haven for endangered animals and one of the few net absorbers of climate-warming carbon dioxide.

But with the oil industry that fuels 45% of its economy facing decline, self-styled 'Green Gabon' wants to ramp up other industries while maintaining its forest cover above 85%.

White - a biologist and former Wildlife Conservation Society officer - said halting industrial logging, as some environmentalists wish, was not realistic.

"Let them come here and show me how to manage the forest and how to create jobs for the Gabonese people and how to replace the oil economy that we're going to lose," he said.

"There has to be a fair deal for Gabon. And we believe the fair deal does involve sustainable forestry," he said. "If you do it right, you keep the forest. If you do it wrong, you lose the forest."

Gabon reckons it can maintain the forests allotted to logging concessions, which cover 60% of the country, by permitting just one or two trees to be cut per hectare with 25-year gaps to let the areas recover.

A means of limiting emissions promoted by The Nature Conservancy is part of Gabon's forest plan.

Reduced Impact Logging for Climate (RIL-C) can lower emissions by minimising collateral damage from tree-felling, according to a 2019 study in the journal Forest Ecology and Management.

This means making sure that concessions mind their carbon impact, build narrower roads, fell trees in the direction that causes least damage, and use less destructive equipment.

With The Nature Conservancy, Gabon has tested RIL-C and plans a nationwide roll-out that it forecasts will help cut logging emissions 50% by 2030 and maintain low deforestation even as timber production grows 20%.

"The crux lies with the implementation of course," said Gijs Breukink, a forestry coordinator at the World Wildlife Fund, which backs RIL-C as a tool for responsible forest management.

But he and other forest scientists warn that without proper oversight, even so-called sustainable logging often opens up areas to illegal felling, poaching and agriculture.

To combat these threats, Gabon must monitor its forests closely and not rely on outside auditors like the Forest Stewardship Council (FSC), said Florida University biologist Francis Putz, who worked on the original RIL-C research.

Gabon's plan "shows some gumption", Putz said. "I don't know how successful they're going to be. But so far, it seems like a brave and well-informed effort."

Democratic Republic of Congo, with the largest share of Congo Basin rainforest, demonstrates the risks of poor management. It lost nearly 500,000 hectares of primary forest in 2020, second only to Brazil, according to Global Forest Watch.

White wants to show Gabon is serious about tackling illegal logging, which before he was appointed in 2019 accounted for nearly 40% of the $800 million timber industry, according to ministry estimates.

His predecessor was fired over a scandal involving hundreds of missing containers of protected kevazingo wood.

"Unfortunately, we have some baggage," White said.

The government now requires all concessions to get FSC certified. It is the main global scheme for certifying sustainable wood-based products, but some NGOs say it is no guarantee forests have been adequately protected.

Gabon is also working with the London-based Environmental Investigation Agency on a timber-tracing system, while Gabon's space observation agency is monitoring forest cover.

The wood's legal credentials are checked before it is stacked for processing. Some trunks are turned into planks and plywood sheets, others into high-end furniture.

Instead of the $200 per cubic metre Gabon once earned from raw wood exports, plywood fetches $500 and furniture up to $3,000, while the extra processing has created 8,000 new jobs, said Igor Simard, Gabon manager of the firm that oversees the site.

If it can develop more local expertise, Gabon could add up to $1.56 billion of value by making fine furniture from the 500,000 cubic metres of wood exported annually as sawn timber, the African Development Bank says.

Around 450 km south of Libreville, through seemingly endless rainforest, residents of the town of Mayumba are hoping a new sustainable land management business will provide jobs.

"We hope companies will come and bring this place to life," said shopkeeper Jean-Christophe Elenga.

"The forest is really enormous," he said, when asked about logging's environmental impact. "It will always provide." 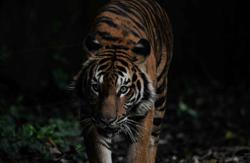 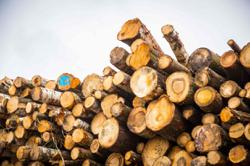