Conviction of Mexican drug lord 'El Chapo' should be thrown out, lawyer argues The 2nd U.S. Circuit Court of Appeals in Manhattan appeared receptive to the argument that Guzman's trial judge in Brooklyn should have inquired into whether jurors improperly followed the case in the media during the blockbuster trial.

It was less sympathetic to a claim that Guzman's conviction was tainted by 2-1/2 years of solitary confinement in the since-closed Metropolitan Correctional Center in Manhattan, which his lawyer Marc Fernich called a "modern dungeon."

Guzman, 64, was convicted in February 2019 of trafficking billions of dollars of drugs and conspiring to murder enemies, as a leader of Mexico's Sinaloa cartel.

He is serving a life sentence at Colorado's Supermax, the most secure federal prison, and was ordered to forfeit $12.7 billion.

Guzman's appeal focused on a Vice News article where an unnamed juror said at least five fellow jurors followed media coverage of the trial, and lied about it to the presiding judge, U.S. District Judge Brian Cogan.

The coverage included a claim that Guzman had drugged and raped teenage girls, which Guzman's lawyers have denied.

"You (have) five jurors who don't know the meaning of an oath," Fernich said. "If that doesn't cry out for instant inquiry, I don't know what does."

"The evidence here is not competent, it's just not," Mehta said.

At least two members of the three-judge appeals panel suggested it wasn't as clear cut.

"(If) we think the district court was incorrect to say 'taking all this as true it still doesn't matter,' then that undercuts a large part of your abuse of discretion argument," Circuit Judge Gerard Lynch told Mehta.

In contrast, the panel questioned why Guzman didn't object more forcefully and sooner to jail conditions he described at his sentencing as "psychological, emotional, mental torture 24 hours a day."

Circuit Judge Jon Newman told Fernich: "To tell me he's an escape threat has very little if anything to do with whether his confinement prevented him from communicating with his lawyers."

Guzman had twice escaped maximum-security prisons in Mexico, once while hidden in a laundry cart and once by crawling through a tunnel dug into his cell, before being recaptured in a bloody gun fight in 2016.

His wife, former beauty queen Emma Coronel Aispuro, 32, pleaded guilty in June to helping run his drug empire. She could face a decade in prison at her Nov. 30 sentencing. 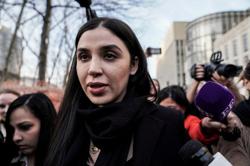