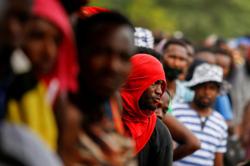 MEXICO CITY (Reuters) - A car chase and shootout between gang members and law enforcement near Mexico's northern border left three members of the powerful Gulf Cartel dead along with one bystander, officials said on Saturday.

The incident began on Friday evening in the border city of Matamoros, when military and police officers attempted to halt several suspicious vehicles, officials from the northern state of Tamaulipas said in a statement.

Gang members fired on the security forces, set up 15 blockades across the city and set fire to several cars. Some also took off on foot into downtown Matamoros.

It was the second major incident in Matamoros in less than a week. Last Sunday, videos on social media showed a line of cars speeding through the city accompanied by rapid gunfire and flying bullets.

From 2019 until March of this year, Matamoros had been home to a sprawling camp of migrants https://www.reuters.com/article/us-usa-immigration-mexico-feature-idUSKBN2AZ0GB who were ordered to stay in Mexico while waiting for asylum claims to be processed in the United States under a Trump-era policy called the Migrant Protection Protocols (MPP).

The program has been heavily criticized by migrant advocates for sending asylum seekers to crime-ridden border cities, such as Matamoros, for lengthy waits.

U.S. President Joe Biden has attempted to end the policy, but his administration for now is taking steps to comply with a court ruling to keep the policy in place https://www.reuters.com/world/us/us-prepares-resume-trump-remain-mexico-asylum-policy-november-2021-10-15as of mid-November.

(In paragraph 4, this story corrects to change description of social media videos to make clear they show a previous incident in Matamoros last Sunday, not the shootout on Friday.)