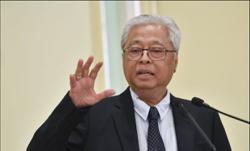 PUTRAJAYA: Two policies have been endorsed by the National Physical Planning Council that will ensure strategic, inclusive and sustainable development in the country, says Datuk Seri Ismail Sabri Yaakob.

Ismail Sabri, who chaired the meeting, said the NPP was prepared to determine the way forward for the country's physical development including economy, environment and social.

"The implementation of the NPP requires the involvement of all parties at all planning and development levels, be it at the Federal, state or local government stage," he said in a statement released after the meeting.

The NCZPP is a strategic plan on land usage, outlining measures such as conservation and resource management along the coastal areas of the peninsula as well as Labuan.

Ismail Sabri said the NCZPP was formulated taking into account geo-disaster threats such as coastal erosion and climate change that will affect socio-economic development as well as the environment.

A coastal vulnerability index (CVI) will be an important instrument in the NCZPP, he said.

CVI is a method used in the decision-making process in long-term coastal planning and management.

"The meeting also agreed to the setting up of a regional planning committee for states in the northern peninsula.

"The main function of this committee is to coordinate planning issues and to advise state governments and local authorities on appropriate development plans for the region," he said.

The Prime Minister said the role of the National Physical Council is to advise the federal and state governments on matters relating to town and country planning and is the platform where collective decisions are made to coordinate developments between states.

"The current focus of this government is to give a high priority to sustainable development. This is in line with our commitment as stated in the 12th Malaysia Plan," said Ismail Sabri.