The deal prevents possible confusion that could be caused if each of the provinces - which have primary responsibility for health care - issued their own unique certificates. The officials spoke on the condition they not be identified.

"Many (countries) have said they want to see a digital ... verifiable proof of vaccination, which is what we're delivering," said one official.

In addition, federal officials are talking to nations that are popular with Canadian travelers to brief them about the document.

The Liberal government of Prime Minister Justin Trudeau announced earlier this month that from Oct 30, people wishing to travel domestically by plane, train or ship would have to show proof of full vaccination. 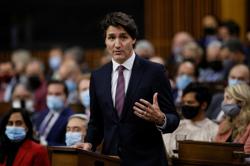