Greens party co-leader Annalena Baerbock speaks on a stage during a party meeting to discuss the results of the exploratory talks and the start of negotiations for a possible new government coalition, in Berlin, Germany, October 17, 2021. REUTERS/Annegret Hilse

The remarks by Annalena Baerbock, considered a likely foreign minister in the next government, hinted at a key faultline in talks that are due to start Thursday between her party, Olaf Scholz's Social Democrats and the Free Democrat liberals on forming Germany's next government.

"We can see a poker play by Russia," she told the Funke newspaper group in an interview published on Wednesday. While high demand and tight supply also play a role, "we hear that gas deliveries are being cut... We must not let ourselves be blackmailed."

Baerbock said it was important to enforce European Union rules that pipeline operators must not be the producers of the gas they transport. Gazprom both owns the Nord Stream 2 pipeline and produces the gas it would carry. Unless this changes, the pipeline will need an exemption to start operating.

"This could be used by Russia to force a quick authorisation of Nord Stream 2, even if all the legal boxes haven't been ticked," she added.

Scholz's Social Democrats, who would be the largest party if the three-way "traffic light" coalition is formed, have long backed the pipeline despite criticism it increases Europe's dependence on Russian energy and makes transit states like Ukraine more vulnerable to Russian interference.

Baerbock added that she thought it likely that the Greens would be successful in persuading the other parties to agree to bring a full exit from coal-fired generation forward to 2030 from 2038. 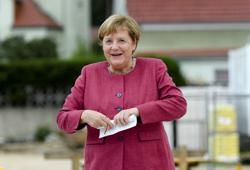