FILE PHOTO: Members and supporters of the Russian Communist Party attend a rally to protest against the preliminary results of the parliamentary election in Moscow, Russia September 20, 2021. REUTERS/Shamil Zhumatov/File Photo

MOSCOW (Reuters) - Russian police detained opposition activists on Friday and warned they would break up any illegal rallies this weekend after an opposition coalition angered by last week's parliamentary election urged voters to gather in Moscow.

Several politicians, most of them Communists, have banded together, saying they were cheated of victory by a crooked online voting system in the parliamentary vote and calling for the system to be scrapped.

The Communist Party, which is seen as part of the "systemic" opposition that is tolerated by the Kremlin and has parliamentary seats, has invited voters to meet its lawmakers on Saturday and has called for the Moscow vote result to be revised.

The final election results were released on Friday and handed the ruling United Russia party that backs President Vladimir Putin 324 of the State Duma's 450 seats.

The Kremlin has said it wants electronic voting, which was used in Moscow for last week's election as well as several other regions, to be rolled out nationwide in future votes.

The Moscow mayor's office said the Communist Party event had not been authorised because of COVID-19 and police said unauthorised street events would be a breach of public order and immediately broken up.

But Gennady Zyuganov, head of the Communist Party, told the RIA news agency that the event was entirely legal.

In their statement, police said officers had brought 30 people to account this week over a similar protest held on Monday in the election's aftermath. Police are still looking for other attendees, they said.

Police detained or tried to detain at least six people on Friday over Monday's event and called at the homes of others, the OVD-Info protest monitoring group said.

Marina Litvinovich, one of the candidates in the opposition coalition, told Reuters they would hold similar protest gatherings across the country depending on turnout in Moscow on Saturday. 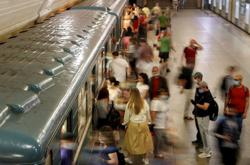