NEW YORK (Reuters) - France's Foreign Minister Jean-Yves Le Drian said on Monday that world powers and Iran were likely to meet on the sidelines of the annual gathering of world leaders at the United Nations later this week.

The meeting, which would include all the parties to the 2015 Iran nuclear deal with the exception of the United States which pulled out of the accord, would aim to build some "positive momentum" for negotiations to resume after breaking off in June, Le Drian told a news conference. 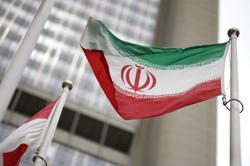