ISLAMABAD (Reuters) - New Zealand's cricket team refused to travel on Friday to the stadium in Rawalpindi where they were due to to play the first one-day international against Pakistan, citing security concerns, two Pakistani officials said.

"Our security officials and Pakistan cricket board has been trying to convince the team for hours, but that didn't work," said a top security official with direct knowledge of the security details on the visiting team.

New Zealand is visiting Pakistan for the first time in 18 years to play three one-day internationals and five Twenty20 matches in Rawalpindi and Lahore. 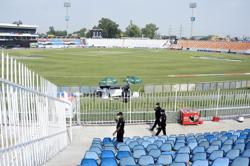