Finianos, a Hezbollah ally sanctioned by the United States for his links to the group that it considers a terrorist organisation, could not immediately be reached for comment.

The massive August 2020 explosion was caused by a large quantity of ammonium nitrate which had been stored unsafely at the port for years. The arrest warrant is the first for an ex-minister arising from the investigation.

The blast killed hundreds, injured thousands and destroyed large swathes of the city but more than a year later, no top officials have been held accountable, angering many Lebanese.

Judge Tarek Bitar, who is now leading the inquiry into the huge explosion, had issued requests in July to question former prime minister Hassan Diab and other top officials. They included former public works minister Finianos, whom Bitar's predecessor Fadi Sawan had charged with negligence.

All have denied wrongdoing.

Sawan was removed from the probe in February after a court granted a request for his dismissal by two other former ministers he had charged with negligence for the disaster - Ali Hassan Khalil and Ghazi Zeaiter.

Diab, the former Lebanese prime minister, is due for questioning on Sept. 20, although is unclear whether he will return for the session after leaving Beirut on Tuesday for the United States.

Bitar issued a subpoena for Diab on Aug. 26 after he failed to appear for questioning.

On Thursday, families of the victims demonstrated outside of Beirut's Palace of Justice and blocked a nearby road, angry at the lack of progress in the investigation.

"We are going to start taking steps that are not peaceful," Ibrahim Hoteit, the spokesperson for the victims told local television channel MTV from the demonstration. 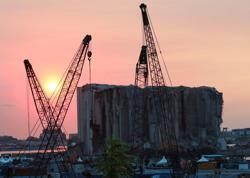