BRUSSELS (Reuters) - Poland must change its legal definition of rape to better protect women, Europe's top rights watchdog said on Thursday in the latest challenge to the country's ruling nationalists over human rights and democratic values.

The Council of Europe said Warsaw should increase efforts to combat sexual violence, including by changing the definition of rape to "move away from a force-based definition to one covering all non-consensual sexual acts."

"Without a consent-based definition of rape in criminal law, prosecutors will invariably decide against seeking an indictment in cases where the sexual act is undisputed, but consent is not," it said in a statement.

Poland should also improve emergency care and services for victims of sexual violence, train police and medical staff better as first responders to rape cases and increase dialogue between the state and women's rights advocates, it said.

The statement is part of a review of how countries implement the 2014 Istanbul Convention on preventing and combating violence against women. Of 17 states analysed so far, only three - Belgium, Malta and Sweden - penalise sexual violence on the grounds of lack of consent alone.

Six of the EU's 27 states have not ratified the convention -- Hungary, Bulgaria, Slovakia, the Czech Republic, Latvia and Lithuania.

Women's rights is one of several areas in which Warsaw is at odds with the EU, where the executive European Commission has the power to withhold funding to countries that undercut democratic rights and values.

The Commission has also challenged Poland over lesbian, gay, bisexual or transgender rights, and had given Warsaw until Wednesday to respond to criticism of a decision by some Polish communities to declare themselves "LGBT-free".

The Ministry of Family and Social Policy dismissed the Commission's concerns that such a designation amounted to discrimination, saying in a statement on Wednesday that it did not legally limit the right of all people to live or work there.

Warsaw has said it will plug the gaps should the self-proclaimed "LGBT-free" zones lose EU funding.

The ministry also said procedures were in place to safeguard against discrimination in projects funded by the EU, and that they were being carried out in line with EU laws.

A Commission spokesperson said Poland's response was being analysed. Should it find the reasoning faulty, it can tell Poland to make specific amends or sue Warsaw at the top EU court. 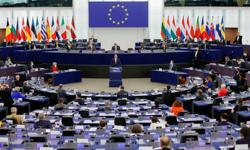