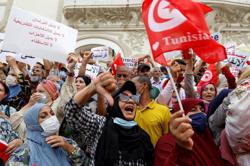 Saied invoked a national emergency in taking executive control of the government and freezing parliament in a move that was welcomed by protesters disgruntled over years of disorder and stagnation but branded a coup by his political opponents.

The anti-corruption authority's photos of Mechichi, posted on its website, appeared to dispel unconfirmed reports that he was under house arrest.