BRASILIA (Reuters) - Brazil's far-right President Jair Bolsonaro has asked Senator Ciro Nogueira to be his chief of staff to shore up support in Congress in the face of falling popularity and growing outrage over his handling of the world's second-deadliest COVID-19 outbreak.

Nogueira, a leader of the center-right Progressives Party(PP), tweeted on Tuesday that he has accepted the job and is expected to be sworn in this week as Bolsonaro's closest minister, replacing a retired general.

He will be the first heavyweight politician to enter Bolsonaro's inner cabinet as the embattled president seeks allies to shield himself from calls in Congress for his impeachment and a Senate investigation of irregularities in the government's purchase of COVID-19 vaccines.

Nogueira belongs to the same PP party as House Speaker Arthur Lira, who has refused to take up any of the dozens of impeachment requests filed against Bolsonaro.

"The appointment solidifies the presence of this key party in the government and gives Bolsonaro some peace of mind," said Lucas de Aragao, a partner at Brasilia consultancy Arko Advice.

Bolsonaro has yet to decide which party he will join to seek re-election next year and the PP will likely become the main component of any coalition he will try to build, Aragao said.

Recent opinion polls show Bolsonaro's popularity plummeting over his handling of the coronavirus pandemic, as he has minimized the gravity of the situation despite the deaths of 550,000 Brazilians. The polls also show him being defeated handily by former leftist President Luiz Inacio Lula da Silva if the election were held today.

To make matters worse, the Senate probe has implicated the government's chief whip in the lower house of Congress, Ricardo Barros, also of the PP party, in a scandal surrounding a purchase contract for 20 million doses of the Covaxin vaccine made by India's Bharat Biotech.

A health ministry whistle-blower accused the president of ignoring warnings about the 1.6 billion-real ($316 million) deal. Bolsonaro and Barros have denied all wrongdoing, and the government has since canceled the contract.

Nogueira is a leader of the "centrao" or big center coalition that Bolsonaro has embraced to survive politically, even though dozens of their lawmakers have faced graft investigations.

Critics say Bolsonaro has joined corrupt politicians he vowed to bring down when he campaigned for office in 2018.

In an interview on Monday, Bolsonaro said he would lose the support of "almost half of Congress" if he did not deal with lawmakers under investigation.

"For now, this is what I have to work with," he told Radio Arapua. 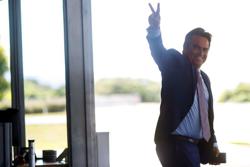