BAGHDAD (Reuters) - An Iraqi paramilitary group said on Monday one of its ammunition depots came under drone attack near the southern city of Najaf.

It said that at least two separate attacks took place hitting the same depot around dawn, but gave no further details.

The U.S.-led military coalition which supports Iraqi forces against Islamic State militants said it had not carried out any air strikes in Iraq or Syria in the last two days.

Iraqi security officials did not immediately comment. The group targeted is part of Iraq's Popular Mobilisation Forces, the state-affiliated paramilitary grouping, and is not viewed as one of the hardline pro-Iran factions that dominate the PMF.

(Reporting by Baghdad Newsroom and John Davison in Geneva, editing by Mark Heinrich) 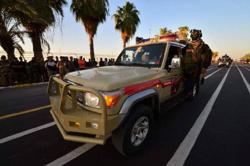