TUNIS (Reuters) - Tunisian President Kais Saied on Sunday sacked the prime minister and froze the activities of parliament, leading his opponents to accuse him of a coup.

This is a selection of what significant players in and outside Tunisia, where regional opinion was often split between states that are friendly or hostile to Islamist ideology, had to say.

Saied said his actions were in line with the constitution, a response to "hypocrisy, treachery and robbery of the rights of the people" by the political class and denied conducting a coup. He warned that violent opposition would be met "with bullets".

Parliament Speaker Rached Ghannouchi, head of the moderate Islamist Ennahda party which is the biggest in parliament, called the move a coup and urged Tunisians to come onto the streets against it. "Kais Saied is dragging the country into catastrophe," he told Turkish television.

The next three largest parties, Heart of Tunisia, Attayar and Karama also rejected the move as a coup.

Chaab, with 15 of the 217 seats, was the largest party to back Saied, saying it had "corrected the revolutionary path".

Abir Moussi's Free Destourian Party, which opposed the 2011 revolution and gained in opinion polls this year, has not commented.

Neither Prime Ministe Hichem Mechichi nor any of his cabinet have publicly commented Saied's move. He has not been seen in public since the announcement but security sources said he is at home and not under arrest.

Saied has said he will also replace the justice and defence ministers. He has not said whether the other cabinet members will remain.

The UGTT labour union, with a million members and a previous role in helping defuse moments of political crisis, avoided directly criticising Saied after its leader met him on Monday.

It said Saied must move on from the extraordinary measures named in the constitution quickly and put in place a clear road map to ally fears of an assault on democracy.

Former president Moncef Marzouki, who helped oversee the transition to democracy, said Saied's move was a coup. He said Tunisians might hope it was the way out of a political crisis but he feared it was the start of a slope "into an even worse situation".

Saied spoke by phone to Algerian President Abdelmadjid Tebboune but there was no word about their discussion.

In Egypt, where the government has suppressed the Muslim Brotherhood, a movement long seen as backing Ennahda, there was no official reaction but state media presented Saied's move as part of a battle against the "terrorist Brotherhood organisation".

Neighbouring Libya is itself torn between rival factions. Commander Khalifa Haftar in eastern Libya, who presents himself as a scourge of Islamists, welcomed Saied's move. A member of the Tripoli-based government, which includes some Islamists, voiced concern.

Official Gulf reaction was largely muted, though Bahrain, which often moves in political lockstep with Saudi Arabia and the United Arab Emirates, both sworn enemies of the Muslim Brotherhood, voiced "hope for brotherly Tunisia to achieve good and development for greater stability and prosperity".

The United States and Western European countries have lavished praise on Tunisia for years for adopting democracy. They were largely slow to respond on Monday to Saied's moves and appeared unsure whether to condemn or endorse them.

The European Union urged all political actors in Tunisia to respect the country's constitution and avoid violence.

A spokesperson for the German Foreign Office said the suspension of parliament was was based on a "a rather broad interpretation of the constitution". Expressing concern about developments, the spokesperson noted Tunisia's "good, impressive progress" showing that democracy had taken root since 2011.

"We do not want to call it a coup," the spokesperson said in response to a journalist's question. "We will certainly seek talks with the Tunisian ambassador in Berlin."

There had been no formal U.S. or French response by mid afternoon in Tunisia, nearly 20 hours after Saied's statement. 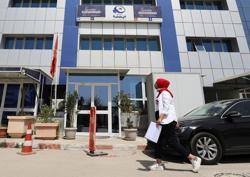