By Camillus Eboh and Abraham Achirga 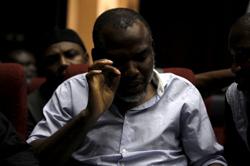 ABUJA (Reuters) - A Nigerian judge adjourned the treason trial of separatist leader Nnamdi Kanu until October after the authorities failed to bring him to court on Monday, citing logistical problems.

The military considers Kanu's Indigenous People of Biafra (IPOB), which campaigns for secession in southeast Nigeria, a terrorist organization. Kanu was due in Federal High Court to face 11 charges, including treason.

The case is one of two on Monday in which Nigerian authorities are seeking to prosecute citizens campaigning for autonomy in different regions of Africa's most populous nation.

The cases underline the government's concern over growing discontent and insecurity.

Prosecution counsel Mohammed Abubakar told the court that unspecified "logistical issues" prevented the Department of State Security from producing Kanu. Judge Binta Nyako ruled that the trial could not proceed in his absence, and adjourned it until Oct. 21.

Kanu's lawyer, Ifeanyi Ejiofor, said he had not been allowed to see his client for eight days ahead of the hearing. The judge ordered that Kanu should have access to his lawyers twice a week.

Kanu was first arrested in 2015, but disappeared while on bail in April 2017. His social media posts during his absence outraged the government, which they said sparked attacks on security forces in southeastern Nigeria.

His whereabouts were unclear until security agents produced him in court in Abuja on June 29, saying he had been detained abroad, but not where. His lawyer alleged he was detained and mistreated in Kenya, though Kenya has denied involvement.

IPOB wants a swathe of the southeast, homeland of the Igbo ethnic group, to split from Nigeria. An attempt to secede in 1967 as the Republic of Biafra triggered a three-year civil war in which more than 1 million people died, mostly from starvation.

Nigeria is also seeking the extradition from neighbouring Benin of Sunday Adeyemo, known locally as Sunday Igboho, a Yoruba activist they accuse of plotting a violent insurrection in southwest Nigeria. Igboho was expected to appear in court in Cotonou on Monday. 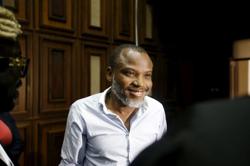