(Reuters) - The United States condemns the Taliban's targeted attacks on former interpreters and other Afghans as well as the destruction of infrastructure, a U.S. State Department spokeswoman said on Friday, calling on the Taliban to prevent their forces from carrying out the actions.

"We vehemently condemn the targeted attacks, the destruction of vital infrastructure, as well as other attacks against the people of Afghanistan," State Department spokeswoman Jalina Porter said at a regular news briefing. 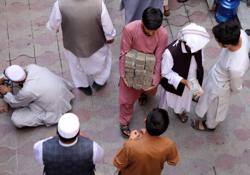