SINGAPORE (Reuters) -Singapore's tourism board said on Wednesday a cruise ship operated by Genting Cruise Lines on a so-called cruise to nowhere had returned to the city-state after a 40-year-old passenger was suspected to have contracted COVID-19.

"The passenger was identified as a close contact of a confirmed case on land, and was immediately isolated as part of onboard health protocols," the tourism board said in a statement.

It said the passenger tested positive to a Polymerase Chain Reaction (PCR) test onboard and had been conveyed to hospital for further confirmatory testing.

The passenger's three travelling companions were identified and isolated, the tourism board said. They have tested negative for COVID-19 and further contact tracing was being done.

All on-board leisure activities on Dream Cruises' World Dream ship had ceased and passengers had been asked to stay in their cabins until test results are out and contact tracing was complete, the tourism board said.

Genting did not immediately respond to requests for comment.

The ship was left Singapore on Sunday for a four-day cruise, according to a media report.

The global cruise industry has taken a major hit from the coronavirus pandemic, with some of the earliest big outbreaks found on cruise ships.

Singapore, which has seen relatively few domestic COVID-19 cases, launched “round trips” on luxury liners in November, which have no port of call and last only a few days.

Such cruises have become popular during the pandemic and are restricted to Singapore residents. 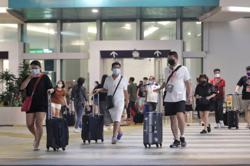