Separated from her daughters in U.S., Honduran mom parents from her smartphone 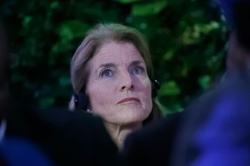 Maria, a woman who was separated from her two daughters and deported after crossing illegally into the United States during the Trump administration, arrives to work at a banana plantation as she waits for her immigration case approval to reunite with them in California, in Choloma, Honduras, June 24, 2021. REUTERS/Carlos Barria

SAN PEDRO SULA, Honduras (Reuters) - Maria's day begins at 7 a.m., when she rouses her daughters for elementary school, and does not finish until late at night, when the kitchen is clean. Like many moms, Maria has found parenthood even harder since the COVID-19 pandemic pushed classes online.

But unlike most other mothers, Maria is raising Michelle, 11, and Nicole, 6, from thousands of miles away. She is in Honduras and they are in California.

U.S. border officials under former President Donald Trump separated Maria from her daughters after they crossed the U.S.-Mexico border in 2017 to seek asylum. The girls were sent to a shelter and then released into the custody of their adult older brother, while Maria was deported to Honduras.

The girls were among thousands of children separated from their parents at the southwestern U.S. border under a Trump-era policy that charged parents with criminal immigration offenses, while children were labeled "unaccompanied" and placed in shelters. Many children were released to sponsors, mostly family members, and hundreds of parents were deported without their children.

At the time, Nicole was still breastfeeding and Michelle was 8. Now Nicole has grown into a rebellious second-grader and Michelle's period has arrived.

Within weeks of taking office, President Joe Biden established a task force to reunite children and their parents or guardians separated under Trump's policy, calling such separations a "human tragedy."

Since then, 37 children have been reunited with parents by the task force, according to the Department of Homeland Security (DHS). Some 2,100 children may still be separated, although many of these families may have reunited on their own, the department said.

Maria is still waiting to join her daughters. Her lawyers have not yet formally petitioned for her reunification as she needs to gather more personal documents required by the U.S. and Honduran governments before she can leave for the United States.

The case highlights the challenges the Biden administration faces as it works to track down separated parents. The reunification effort has been hampered by the need to obtain travel documents from foreign governments and to process U.S. immigration paperwork, a DHS spokesperson said.

Some advocacy groups have pushed the Biden administration to move faster with family reunifications. U.S. officials counter that they are putting a system in place and plan to accelerate later.

Conchita Cruz, co-executive director of the nonprofit Asylum Seeker Advocacy Project (ASAP), said the task force has been responsive to advocates' concerns and she hopes many of the issues causing delays are being ironed out.

"We don't want a process that requires a separated parent to recruit an immigration attorney who is an expert in this program. That's not realistic to get a thousand people back," she said.

Michelle and Nicole now live with their older brother, Maynor, 33, who works 12-hour days selling oranges to support the girls and his own two children.

Maria's smartphone-driven, helicopter parenting keeps her involved in every aspect of the girls' lives: from whether to wear a ponytail or a bun on a given day, to how to navigate adolescence.

"I'm always sending them messages," said Maria from her home, where she works as a seamstress and harvests bananas in the nearby mountains.

She requested to use only her first name given the gang threats she says her family has faced in Honduras.

She rattled off the girls' class schedules and the morning routine she orchestrates via WhatsApp: "Wash your face," "Brush your teeth," "Hop in the shower," "Comb your hair," "Use lemon slices if you've run out of deodorant."

And the most important rule of all: "Don't turn off your telephone on me!"

Maria and her two daughters fled Honduras in 2017 after gang members threatened Michelle, Maria said. They crossed the U.S. border near San Luis, Arizona, that December and turned themselves in to U.S. officials at a time when the Trump administration was rolling out what would become one of its most controversial policies — a crackdown on unauthorized crossings that led to thousands of migrant family separations.

After a few days in detention, a border agent took the girls away, while Maria was bussed to an adult detention center. During her three months in detention, Maria says she was told by an attorney her only option was deportation: either with her children or alone.

"They gave me no real choice," she said.

The Biden task force has identified roughly 3,900 children separated from parents or guardians at the border from July 2017 to the end of the Trump administration, according to a task force report https://www.reuters.com/world/americas/us-efforts-reunify-families-separated-border-moving-slowly-2021-06-08 released earlier this month.

Of the 3,900 children, about 1,800 have already been reunited with their families, according to DHS. Nearly all of those reunifications occurred before Biden created the task force, mostly after a court ordered them in litigation led by the American Civil Liberties Union (ACLU). Many involved parents who had not yet been deported and were still detained in immigration detention facilities.

Lee Gelernt, the lead ACLU attorney in the lawsuit seeking to reunite families, praised the task force's progress in recent weeks and said all parties want to proceed expeditiously.

As part of the ACLU litigation, U.S. lawyers also partnered with advocates across Central America, who went door-to-door, often in dangerous and remote neighborhoods, searching for parents deported without their children.

Dora Melara, a Honduran attorney working with an advocacy group, was tasked with finding Maria.

She had only an incomplete name from a list provided as part of the ACLU lawsuit, so it took her three separate trips to a gang-ridden city in northern Honduras until she found Maria in early 2020 with the help of local taxi drivers, she recalled.

Maria taught Nicole how to write her numbers over video call, after the girl fell behind in math earlier this year and briefly refused to attend her online classes out of frustration. When Michelle's menstruation arrived, she counseled Maynor on which sanitary pads and training bras to buy.

Not a day goes by that the mother and daughters don't talk, except for when the electricity goes out in Maria's neighborhood and her phone battery dies. The girls still manage to surprise their mother, however.

"I know how to swim!" Nicole boasted recently, after Maynor took her to a nearby river, Maria recalled.

Still, there's no replacement for human touch when it comes to coaching a child on how to coax a handful of dough into a flour tortilla for a perfect Honduran baleada - a tortilla stuffed with refried beans, cheese and cream.

"But we're working on it," Maria said.