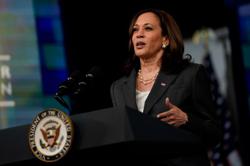 WASHINGTON (Reuters) -U.S. Vice President Kamala Harris will visit the U.S.-Mexico border on Friday for the first time since taking a lead role in immigration issues, her office said, bowing to pressure that she make the high-profile trip.

Harris, who visited the U.S.-Mexico border many times as a senator and attorney general from California, was assailed by Republicans when she visited Mexico and Guatemala this month. She said she would go to the border eventually.

President Joe Biden assigned her the task of addressing the root causes of migration of thousands of people from El Salvador, Guatemala and Honduras who cross the U.S. border from Mexico.

A White House official who asked not to be named said Harris wanted to visit Guatemala and Mexico before going to the border. Since returning, she has been tied up with the vaccination awareness programs, infrastructure negotiations with lawmakers on Capitol Hill and events tied to boosting voting rights, the official said.

"She has always said she will visit the border but it was more like when is it the right time," the official said. In Mexico, Harris told reporters she plans to visit the border without offering details.

Former President Donald Trump, who plans a border visit on June 30, said in a statement: "If (Texas) Governor (Greg) Abbott and I weren’t going there next week, she would have never gone!"

The White House official said Harris's schedule is not dictated by what former President Donald Trump does. "I can assure you we don't take our cues from the former President."

The official said more details on Harris's trip and who she will meet is likely to be released tomorrow.

House Minority Leader Kevin McCarthy said on Twitter that "VP Kamala Harris should have visited the border months ago."

"She now has a chance to see what 100+ Repubs have witnessed firsthand: the Biden admin's open-border policies have created a crisis where children are endangered, families are exploited, and drug cartels are emboldened."

Biden, a Democrat, has moved to reverse many of the restrictive immigration policies of Trump, a Republican he defeated in the November election.

Biden also has left in place a border policy known as Title 42, expelling in five months more than 400,000 migrants detained at or near the border, including many Central American families and asylum seekers sent back to Mexico.

Publicly, the Biden administration insists the order remains necessary to limit the spread of the coronavirus, although it has yet to provide scientific data to support that rationale and many public health experts have opposed it.

On Tuesday, a human rights group released a report that said nearly 3,300 migrants stranded in Mexico since January due to a U.S. border policy have been kidnapped, raped, trafficked or assaulted.

The report, by New York-based Human Rights First, documents cases of migrants and asylum seekers stuck in Mexico since Biden took office on Jan. 20. The number of cases has jumped in recent weeks from roughly 500 such incidents logged in April to 3,300 by mid-June. 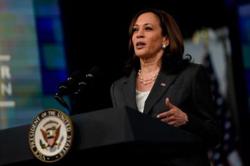