SRINAGAR, India (Reuters) - Indian Prime Minister Narendra Modi will hold face-to-face talks with top political leaders from Jammu and Kashmir on Thursday, the first such meeting since his government revoked the region's autonomy in 2019, detained thousands and imposed a lockdown.

India said carving its only Muslim majority state into two federally administered territories in August 2019 was needed to spur development in the Himalayan region, where an armed insurgency has raged for decades against New Delhi's rule.

Former lawmaker Mohammad Yusuf Tarigami, spokesman of an alliance of the main regional parties formed last year to push for a rollback of the measure, said no agenda had been provided for Thursday's meeting, however.

"The ice has broken," Tarigami told Reuters. "At least we are sitting together and talking."

Alliance leaders would push for a restoration of the status of Jammu and Kashmir prior to August 2019, he added.

Modi's office did not immediately respond to questions from Reuters.

India's removal of the region's statehood and semi-autonomy in 2019 drew stiff local opposition. Jammu and Kashmir is claimed in full by India and its neighbouring arch rival Pakistan, although both control only parts of it.

India has said it is trying to speed development and infrastructure projects and strengthen village-level governance, even as it deploys heavy security in the restive Kashmir valley to control the insurgency.

The law ministry is also working to re-adjust some assembly and parliamentary constituencies in Jammu and Kashmir, aiming to hold elections in the territory.

But despite the renewed effort at dialogue, people in the Kashmir valley voiced distrust of New Delhi's intentions.

"I don't have much expectation from the meeting," said Nisar Ahmad, a university student in Kashmir's main city of Srinagar. "They are not going to reverse what they did."

In a bid to forestall protest over its move in 2019, India locked down the Kashmir valley, putting strict curbs on movement and telecoms, snapping most mobile telephone and internet links for weeks.

Even 18 months later high-speed mobile internet had been only partially restored. 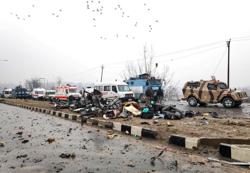