FILE PHOTO: Belarusian President Alexander Lukashenko delivers a speech during a meeting with parliamentarians, members of the Constitutional Commission and representatives of public administration bodies, in Minsk, Belarus May 26, 2021. Maxim Guchek/BelTA/Handout via REUTERS

WASHINGTON (Reuters) - The United States, Canada, Britain and the European Union on Monday called in a joint statement on the Belarusian government "to end its repressive practices against its own people."

They also urged Belarusian President Alexander Lukashenko's government to cooperate with international investigations "into the events of May 23rd," when a Ryanair jet was forced to land in Minsk and a Belarusian journalist and his companion on board were arrested. 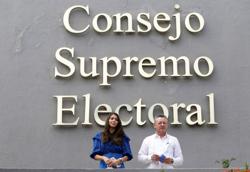